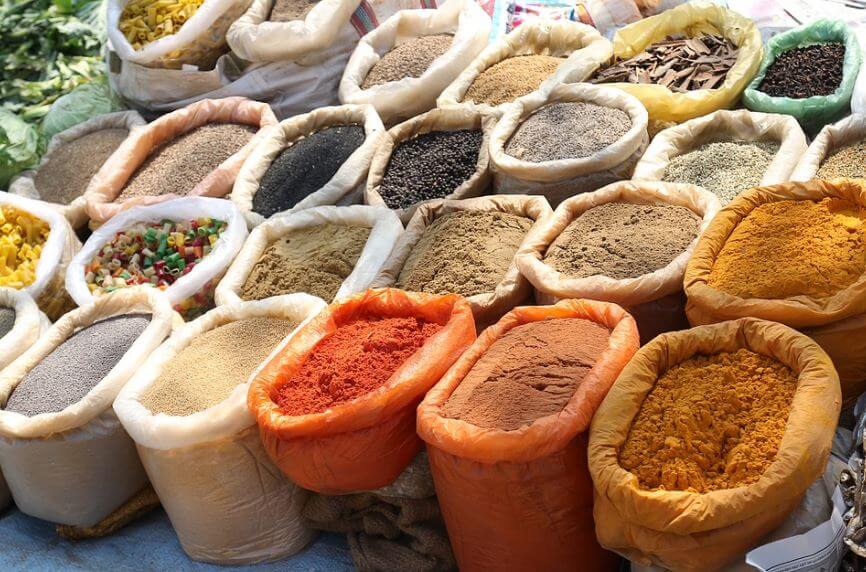 It is no secret with Indian Cooking that spices are nearly always involved. Masalas and Spices are the souls of an Indian Kitchen. No matter what the dish whether it is simple or a special dish, spices are guaranteed to be used. Spices are often miss conceived as being used for making dishes hot they are used to add flavour to dishes. In Indian dishes, there is a various amount of spices used both whole and ground and they are often combined to make spice mixes. Every spice has its own unique flavour and when used together they marry together and add great flavour to a dish. Spices are generally mixed together in a pestle and mortar. If you would like finely ground spices a powerful blender or a spice grinder can be used. The South Asian culture use many of their spices for health and medicinal purposes, digestion, preserve food, and cure illnesses. There are so many different spices for cooking Indian Dishes but here are some of the main essential Spices that are used in Indian Cooking:
There are two types of Cardamom Black and Green spice. Green is the most common and can be used for a variety of options from lassis, Indian desserts, and spice mixes. Its flavour is light and sweet. It gives a great flavour boost to dishes such as curries, chai, and rice dishes.
Black Cardamom, on the other hand, needs to be used sparingly and with caution as it is smoky and powerful. The seeds would normally be used on their own, but if you use the whole pod it is best to take it out before serving the dish as it may be too hot to bite into.
Cumin flavour is often characterised as earthy and warm as well as a bit bitter. It is commonly used whole or mixed with spices to add a Smokey flavour to Indian dishes. It comes available toasted or ground or as seeds. It is used a lot in an Indian curry as a strong aromatic spice. One thing to remember when using cumin in a dish if you are dry-roasting the spice it will burn quite quickly, only toast the spice, so you get the hint of smoke and fragrance. It is high in iron and is beneficial to nursing mothers.

Turmeric can be used fresh like Ginger or dried. The yellow spice gives Indian dishes its characteristic colour. It is often referred to as the miracle spice for its medicinal purposes. It has a very peppery flavour and is often mistaken for curry powder. Turmeric can stain quite easily so care needs to be taken with clothes and utensils.
Cloves are commonly used in Indian cooking. Its strong flavour comes from the concentration of essential oils. Technically cloves are flowers, their oils are pressed out before they are dried and used in cooking. They can blend into spices or be used as a whole. Cloves can be used as much as you need, but some care should be taken as it can tend to overpower other spices.
The flavour of mustard is used all over the world in different cuisines. Mustard seeds come available in Black, Yellow, and Brown and are all interchangeably used in Indian Cooking. The flavours are released when the seeds are cooked in oil or crushed. The black seeds are a lot stronger than the yellow and brown. There nutty and smoky flavour is a staple in curry powders and curries, and the mustard oil is commonly used in the North of India. They are also great to flavour vegetables and soups. They should be stored away in a tightly sealed container in a cool, dark, and dry place.
Garam Masala is a staple of Indian cooking and is used in a lot of red meat dishes, chole masala, and pulao’s. It is a blend of spices that vary and is best added to the dish when it is almost finished so the flavour doesn’t turn bitter or cook-off. Garam translates to “heat” and this masala does just that, it heats the body due to the warming properties in the spice.

Cassia Bark is also known as Chinese Cinnamon, it is a genius of the Chinese tree. It is cheaper to produce. It differentiates by being called true cinnamon. Indians used cassia bark instead of true cinnamon in their cooking as it is milder in flavour and you can use larger quantities in the dishes. Cassia can be used mixed with other spices or used whole. It is a rough, tree bark texture spice and the best way to check that it is fresh is to rub some on your fingers. If you smell a cinnamon fragrance, then it is fresh.
Black Pepper is native to India, (link to: https://heritage-india.com/black-pepper-flavour-centuries/) primarily from the Malabar region and the Western Ghats. The prices for pepper vary a lot as the spice is surprisingly hard to grow, as it can depend on the amount of rainfall. Like many other spices, Black Pepper must be toasted before it is blended. However, for the best fresh flavour it can be directly grounded into dishes.
The kick or spice that comes in Indian cooking is the fiery red powder made of ground red chillies. A lot of Indian food such as marinating meats to flavouring they all get their spicy rep from this red chili powder.

Coriander is known to be one of the oldest spices in the world. It is probably the most used spice on the Indian spice rack. It is characterised by its gentle ridged texture and its golden-yellow colour. Coriander seed is a key element in garam masala. It is often described as fruity and nutty. The seeds are very aromatic with citrus notes. Ground coriander is more commonly used in Indian Cooking. It should be dry-roasted like cumin until you notice a light golden-brown colour to the seeds and they start popping in the pan.
Please follow and like us: